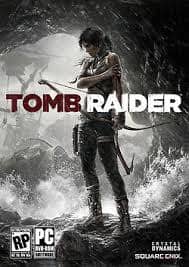 Every gamer’s favourite archaeologist is back, but this time she’s a little different.

The term icon is about as overused a word as celebrity. Whereas most so-called celebs don’t really have the right to use that word, when it comes to icons of gaming Lara Croft is up there with Mario, Sonic and Hungry Horace.

After a good start back in the halcyon days of the PS2, the Tomb Raider franchise has rather gone off the boil in its last few incarnations. So if ever there was a time to reboot the game it was now.

As you will see the new Lara looks similar to her predecessors but also slightly different too. Thankfully now she is, how can we say this politely, less pneumatic. Her appearance will no doubt get all the headlines, this is just one small point because it’s the game itself that has changed the most. Following on from cinema reboots of Batman that are darker and grittier, so is Tomb Raider.

It won’t be giving anything away to say that from the start Lara has it rather rough. First off she is shipwrecked, then captured and tied up by the feet from the ceiling. She then has to set fire to herself and when she falls she lands on a metal spike that goes through her side.

This then sets the scene for what Tomb Raider is like. Lara spends almost all the time caked in mud and blood, some of the latter is hers, some not. 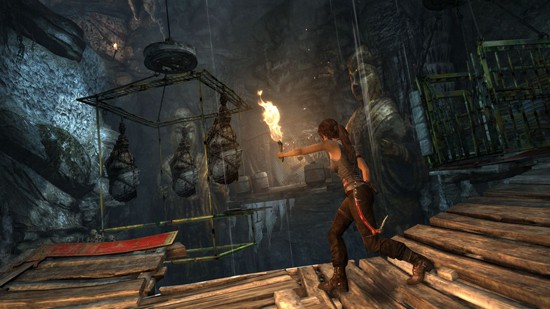 This is because, having been ship wrecked she has to not only find her friends, but also try and get off the island that they are on. This is somewhere off the coast of Japan and is covered with people who want to do harm to Lara and her friends. Why this happens, isn’t ever fully explained we have to say though.

When it comes to platform games that involve, climbing, puzzle solving and more than your fair share of shooting we have to say that the Uncharted series certainly did it for us. In previous TR games there was some shooting, but this was usually of wild animals that wanted to rip you apart and eat you. In this one you soon rack up a body count that Nate Drake or even Arnie would be proud of.

In order to lend some humanity to this, if that’s at all possible, Lara is a little torn up after her first kill. This soon passes and it’s not long before she is killing people with her bare hands and a bow. In fact at one point she has just laid waste to an entire company of baddies and then walks forward 10 metres and sits down by the campfire to rest.

This did make us chuckle a little as it is so detached from what would be the reality of the situation!

It does bring us on to some the mechanics of the game. As with so many games TR uses some RPG elements where you gain XP for completing tasks, getting head shots and stuff like that. You can then use these to buy new skills such as better aim or being able to salvage more from downed enemies and animals. Skinning animals is the big thing in games it seems, following on from Red Dead Redemption and Far Cry 3.

In addition to XP you also collect salvage. As this builds up you can upgrade your weapons. At first you have a pistol, then a bow and after that some other more powerful weapons. What’s most interesting about these is Lara’s ability to stow them about her person.

At times you won’t see her bow, but then low and behold you pull it out of nowhere. The same goes for the other weapons. It’s a small point we know, but there were times when we thought the weapons had gone.

One thing that hasn’t changed is the scenery and setting. Although there might not be quite as many tombs as in previous games, expect plenty of ancient artefacts and collectable items. These are all served up in some sumptuous scenery as you would expect from a AAA, current gen title.

The most important thing with TR is that it plays really well and you just want to keep on going through the story. The mechanics are good and everything flows smoothly with no annoying glitches to spoil the mood.

It is hard not to directly compare it to Uncharted, but there are so many things in common with the two games now. When it comes to dialogue, Uncharted is still in a world of its own though despite Tomb Raider being scripted by Rhiana Pratchett.

Tomb Raider is a very pleasing return to form for an old favourite. It’s been thoroughly made over and is a game that will be up there for game of the year that’s for sure.