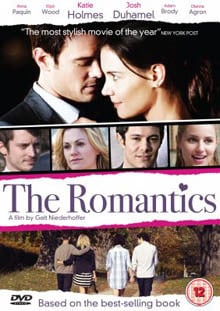 With a half star cast, you could be well forgiven for thinking that this will be a stellar hit. It isn’t.

Looking at the title I was hoping that maybe The Romantics was a rom-com of some sort, how wrong I was. It’s more of a rom-angst and not a lot of fun either.

The film is basically about a group of college friends who are attending a wedding of two mutual friends. The wedding is set somewhere on affluent east coast of America, something like Martha’s Vineyard, you know the sort of thing.

Seeing as this is certainly an angsty film things don’t go to plan. This is because the maid of honour, Laura, (Katie Holmes) used to date the groom, Tom (Josh Duhamel), and the reasons they split come out on the night before the wedding. This, as anybody would guess, doesn’t go down too well with the bride Lila (Anna Paquin) and there’s more tension in the air than at a tug-o-war competition.

Although this may sound like the basis of an OK film, it just doesn’t work. There’s an awful lot of talking, not that that is a bad thing necessarily. It’s just that it isn’t very interesting. It’s as if the film is trying, ever so hard, to be ever so clever.

The trouble is you don’t really get an affinity with any of the characters. You don’t feel anything for Laura who we can only suppose is the ‘hero’ of the film. The groom, Tom, is clearly a messed-up idiot and his whole character just feels like a cliché of a groom on the night before his wedding who is having doubts. Though, really, how many grooms actually do feel like that?

Lila is also quite unlikeable and you do spend most of the movie thinking, what a nasty piece she is and why would anyone want to marry her. Of course the fact that you feel like that about them is down to the skill of the actors and if that was what Anna Paquin was aiming for, then she did a very good job.

The surrounding cast are all a bit of a mish-mash. At one point two of them get it on, for want of a better phrase and another pair decide to go skinny dipping. I guess this is all there is to show something about these people and how they live their lives, it’s just not that interesting.

On the whole The Romantics is a film that is best of left well alone. There is some very good acting, but on the whole, having watched all of it there are many better films to watch with even better acting that are enjoyable to watch. Sitting through The Romantics certainly was more of a chore than a pleasure.

The Romantics is out now on DVD in the UK, released by Signature Entertainment.