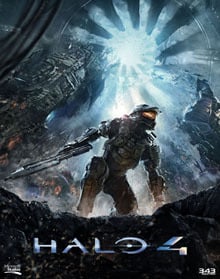 Oh Master Chief, such a legendary icon in modern gaming. Five years he’s been ‘dead’, since the end of Halo 3 in 2007 (yes, we think it’s safe to write that spoiler now, oh and Bruce Willis is a ghost in Sixth Sense). But, as Doctor Halsey says in the opening FMV sequence, ‘Spartans never die.’

Cue the good ship Forward Unto Dawn, seemingly destroyed at the end of Halo 3, with Master Chief and, the closest a 2ft tall holographic AI can come to being a love interest, Cortana, aboard. But it’s just in pieces, you see, with our two safely aboard the main hull. An eerie, orange wall of light scans a cross section throughout the chunk of ship (no more spoilers from us here), which seems to awake Cortana.

Apparently distressed, she pulls up her virtual console and quickly releases Master Chief from a four year cryogenic stasis, pleading to him to get them out of there after he awakes and stretches his legs a bit.

After some quick sharp escaping from immediate environmental threats, some familiar faces show up, as do some firearms that fans of the series will recognise, Chief is back, running, gunning and floaty jumping like he last was all those years ago, and it feels bloody brilliant. 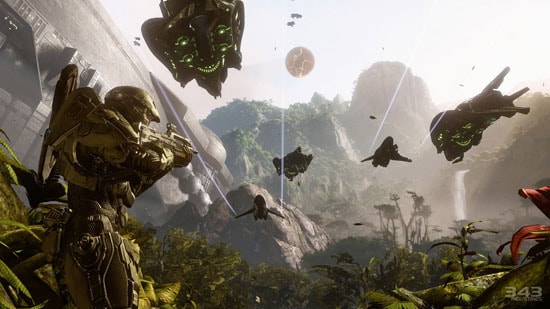 The UNSC Forward Until Dawn eventually crashes into the atmosphere of Planet Requiem, which will be the venue for almost all of Halo 4. Cortana picks up a strange signal, unsure even of whether it’s a distress call or otherwise, and so off they set together to investigate, with the green shoots of sub plots already showing through.

One of these being quite a major one, and it’s that Cortana is descending into Rampancy, which is the AI version of dementia. Short periods of screaming nonsense and a few shrieked orders at Chief earlier in the game did have us a bit suspicious, we have to say, and it’s handled quite tenderly when Cortana does explain that she’s on the way to an early, if timely, death. Chief’s not having a word of this though and has a plan up his green, metallic sleeve.

You can discover the rest of the campaign for yourself, we’re not here to spoil it for you, but what we will say is that you’ll meet a brand new alien race, who look very cool, fire an even cooler new set of weapons (they are seriously impressive), hear some amazing sci-fi scoring and witness the Xbox 360 pushed to what must be its ultimate limit, graphically. It’s just dripping with quality.

If gaming with a friend, or stranger, is your thing, then Halo has continued its tradition of supplying a comprehensive cornucopia of ways in which to enjoy your evolved combat on a more social scale. Whether it be campaign co-op, split screen or online, with up to three others; competitive online multiplayer, with a dozen different game types and a generous helping of varied maps; or Spartan Ops, which might remind you of a certain other kind of Modern Warfare, and for good reason.

Our only comment here would be that Firefight seems to have been left out this time. Perhaps this kind of thing has seen its day though, that being the relentless wave after wave of enemies invading a given arena until you and your mates are all dead. Progress being measured on how much you scored before biting the dust. 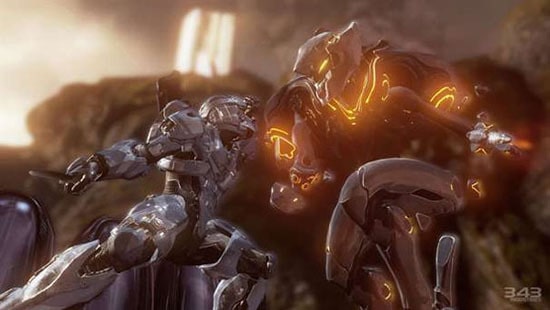 Progress in multiplayer has gone slightly retro, however, by rewarding XP earned with quite frankly better, not just different, weapons and powers for you to tinker about with in your loadout screen. Some may cry foul in that, when they start playing online, they might be facing a load of tooled up veterans, which goes against today’s hand holding mollycoddling which we’re really not fans of.

If you ask us, it just encourages hard work to progress. It’s a harsh world out there, (we mean really out there, stop reading and look out of the window for a moment) this is preparing you for life!

Halo 4 is made by 343 Industries, not Bungie, who were released from its Microsoft obligations after the excellent Halo Reach. Clearly aware of the precious cargo they’d inherited, 343 has done a literally perfect job in retaining every recognisable aspect of the Halo that millions of us are so fond of.

Don’t expect any radical shifts from the formula, but do expect a superb AAA title that is a very hot contender for game of the year 2012. Also, why not start wildly dreaming about what the sequel is going to be like on Durango, the working title of Microsoft’s next generation machine, because they’ve worked wonders on this one.