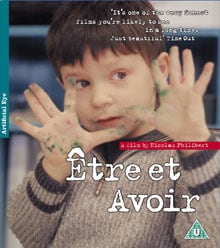 2002 was an important year for documentaries in the West. Michael Moore’s Bowling For Columbine became the first real ‘blockbuster’ documentary, taking in over $21 million in the USA and over $35 million worldwide. This helped herald in a new era for documentaries and their potential for commercial success and the format is still thriving today with numerous factual titles holding their own against their big budget Hollywood rivals (relatively speaking of course). 2002 saw the release of a few other well received and successful documentaries too, with the wonderful Spellbound cracking the $5 million mark at the US box office and enjoying a wealth of critical acclaim. Drifting under the radar that year in terms of commercial success, but enjoying as strong, if not stronger reviews than that or Moore’s film, was Nicolas Philibert’s Être et Avoir (a.k.a. To Be and To Have) though. Ten years on and the film is getting a Blu-Ray release over in the UK, so now is a perfect time to rediscover this gem, if you haven’t already.

Être et Avoir documents a school year (or possibly a little less) in a one-room school in rural France, where one teacher, Georges Lopez, who is nearing retirement, is in charge of the education of a group of children ranging from 4 to 11 years old. We watch them develop intellectually over the months as well as emotionally as Georges deals with various arguments and social problems along the way.

Être et Avoir is a very different documentary than the aforementioned ‘hits’ of 2002. Where Bowling For Columbine attacks institutions with bold statements and hard-hitting footage, Être et Avoir simply sits back and observes. Where Spellbound turns a peculiar children’s competition into a nail-biting sports-movie, Philibert’s film takes its time and lets the natural progression of the class tell its own simple story. I’m not saying those films aren’t successful in their own way, I love them both, but if you’re looking for the obviously crowd-pleasing and fiction-film inspired type of documentary which are prevalent these days, it might take some adjustment to get into this film. I say ‘it might take some adjustment’ rather than ‘it won’t be for you’ because this is a documentary that can provoke emotion and satisfy like any successful drama, it just does so in a much more subtle and slowly unravelling fashion. In fact, Être et Avoir is probably one of the sweetest, most touching films you’ll ever see, which I guess makes it as crowd-pleasing as you get. 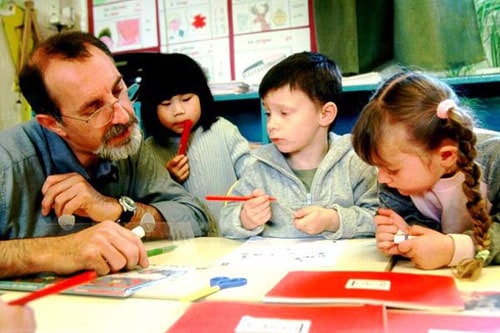 The sweetness comes from the children themselves. Philibert’s quiet, purely observational style allows for perfectly natural coverage of the pupils at work and play. Yes there are a couple of glances to the camera, but you never get the feeling that the group are overly self-conscious about its presence or are getting asked to do anything for it. Due to this naturalism we get to see numerous wonderful little scenes of the children trying to solve problems themselves or getting in and out of trouble. Taking centre stage is the cover star Jojo. One of the younger students, Jojo has a cheeky nature, not always doing as he’s asked, yet never in a vindictive way – his mind just wanders. He’s key to a number of the film’s most memorable moments – when he and Marie try to work the photocopier, when he tries to get out of finishing his colouring and the scene from the cover where Georges helps him clean his hands.

It’s from Georges where the film demonstrates its more touching qualities. Juggling such a broad range of ages and abilities within one classroom, he comes across as pretty much a saint and not in a forced, Dead Poets Society sort of way. He is ludicrously patient with the children, letting them make their way to the answers whenever possible and offering discipline in a diplomatic manner that seems to work incredibly well. As mentioned previously, he also deals with some more personal issues that the children face, working through Nathalie’s social isolation and Olivier’s reaction to his father’s severe illness. Two key scenes where Georges speaks to them one to one are both incredibly moving and seem utterly genuine.

You can clearly see a change in all of the students as they develop and at the end of the film, as the class leave for the holidays, with the older students moving on to another school and Georges facing retirement before the end of the next school year, I couldn’t help but shed a few tears.

Aided by simple yet beautiful cinematography and a effectively minimalist score used in between scenes, Être et Avoir is a quietly joyful film that deserves a place amongst the pantheon of the greatest of documentaries, let alone the strong titles to come out of 2002.

Être et Avoir is out on 12th November on Blu-Ray in the UK, released by Artificial Eye. The picture quality is fairly decent although a lot of the whites suffer from digital grain problems which stood out through the projector I watched it on. Sound is clean and clear.

There are two extra features featuring Nicolas Philibert. You get a 20 minute interview with the director which is of low technical quality, but the content is strong. You also get a Film-making Masterclass with Nicolas Philibert. This is simply recorded in one long shot from a talk he did in Edinburgh, but again the content makes it worth a watch, especially if you’re a budding documentary film-maker.