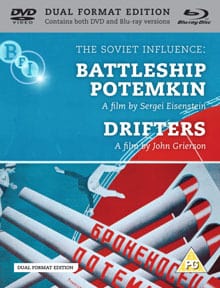 The BFI continue their great work of restoring and releasing classic British films and world cinema with a double bill of Sergei Eisenstein’s great Battleship Potemkin and John Grierson’s Drifters, cleaned up and presented on dual format DVD & Blu-Ray. The reason these two films are being packaged together isn’t just the similar ocean-bound setting, but the fact that Grierson was heavily influenced by Potemkin in his film (which was his debut) and the very first screening of the Russian masterpiece in the UK was a private London Film Society event in 1929 where it was shown back to back with Drifters.

I’m not going to go into great detail on why this film is deemed such an important and great work of cinema. So much has been written already and I couldn’t do it justice. What I will do is comment on my personal feelings on watching it (for only the second time).

I actually only first saw Battleship Potemkin in its entirety last year, which is rather shameful for someone that has been such a film nut for twenty-odd years and has worked as a video editor for the last 8 years. Having studied film through my media production degree I’d seen the Odessa Steps sequence dozens of times and heard much of the importance of Eisenstein’s montage techniques, so I kind of felt like I’d already seen it or that it was something to be analysed, not necessarily watched and enjoyed.

How wrong I was.

What impresses me most watching Battleship Potemkin is how exciting it is. Eisenstein’s groundbreaking editing techniques, using montage and symbolism to tell the story and create mood and atmosphere, aren’t just impressive from a historical stand-point, but they’re impressive because they still work remarkably well. His cinematic language was taken on board by filmmakers around the world (see below) and was and still is standard practise, so you’d expect it to be rough around the edges and only partially effective these days, as most early experiments are. Eisenstein’s film however, is as tense and rousing as it was almost 90 years ago. I can only imagine the impact it had at the time.

Telling the true story (with heavy dramatic licence) of a naval mutiny in Russia in 1905 then the public revolt and ensuing police massacre it inspired, the film is clearly a propaganda piece praising the revolution that brought forth the Soviet Union from the hands of the Tsarist autocracy. This fact doesn’t taint the quality of the film though. Whether or not you agree with the politics being championed, it’s hard to not be riled up by the story of the sailors being hard done by on board the Potemkin and the public being mown down by the police in broad daylight after they dared to speak out against the regime. 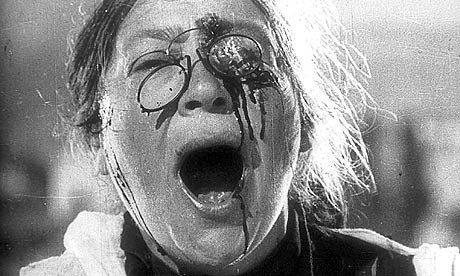 Of course it’s the editing that helped make the film famous. The Odessa Steps sequence, which anyone with even a passing interest in film history will have come across, is a classic example of this in action, with the faceless, oppressively regimented lines of armed police marching across the screen being juxtaposed with close ups of the devastation they are causing. It’s all on an epic scale with hundreds of extras joining the chaos on the huge flight of stone steps, but the power comes in the close ups of those trying to survive or stand up against the officers, being mercilessly cut down along the way. Shots of a small boy being trampled still prove very disturbing and the intercutting between the carnage and a runaway baby carriage sears itself in the mind.

There’s more to it than that one scene though. The tension of the final sequence for instance puts some of Hitchcock’s work to shame and the build up to the sailors’ mutiny as a group of them are almost shot down is extremely powerful. The imagery is almost as strong as the editing too, with good use of depth and strong lines in frames as well as some surprisingly beautiful shots. The sequence when the Potemkin arrives at Odessa at dusk and leaves by dawn is gorgeous, with the low light and mist creating a moody calm amongst the clamour of the rest of the film.

Accompanying this release is a recording of the 1926 Edmund Meisel score used for the Berlin premiere of Potemkin. This is big and bombastic, but works very well, adding to the already hugely dramatic atmosphere.

I can praise the film until the cows come home, but you all know how great the film is even if you haven’t seen it. If the latter is the case, you really should remedy this. Battleship Potemkin isn’t the stuffy historical artefact it might first seem, this is an example of groundbreaking cinematic artistry that remains a powerful and exhilarating watch.

John Grierson was a respected British film critic working in the US back in the mid-twenties and was known to champion Eisenstein’s work, helping bring films like Battleship Potemkin to Western audiences. In 1927 he returned to Great Britain though, eventually finding himself working for the Empire Marketing Board (EMB) to help them promote British trade and national pride throughout the empire. Through the EMB he directed Drifters, the first of only two films he directed in his lifetime (he moved into producing in later years). It follows a herring-fishing boat from departure in Scotland to a market in East Anglia where the fish are processed and sold.

Although clearly influenced by Eisenstein (especially when packaged in such a way), Drifters is still a hugely influential film in its own right. Grierson is famous for reportedly coining the term ‘documentary’ when discussing Robert J. Flaherty’s Moana in 1926, but his own film Drifters was a key turning point for the genre, bringing the modern documentary as we know it to fruition, particularly in the UK. Whereas early factual films either simply recorded events in single shots (a train coming into a station, factory workers leaving work etc.) or were made up of reconstructions such as in Nanook of the North, Grierson actually took his cameras onto a boat and filmed much of events for real. Some scenes were ‘faked’ such as those below decks, but in general this was an attempt to show things as they were without too much tinkering. 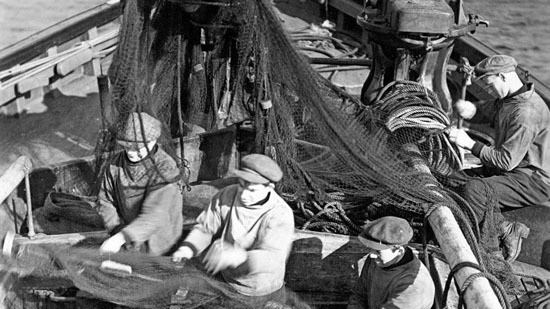 What is special about Drifters though isn’t just the ‘reaslitic’ portrayal of events, but the way the footage is put together to create something poetic and unconventionally beautiful. Although the work of the EMB and later GPO consisted of filming seemingly dull everyday activities to promote a British ‘way of life’, its talented filmmakers used this task to experiment with film techniques and help shape the cinematic landscape beyond even documentary.

Drifters, like Potemkin, impresses largely through its editing techniques. Grierson crafts effective montages that cut between the pulse of the boat’s machinery, the honed skills and hard work of the fishermen and the uncompromising power of nature around them. It doesn’t have the tension or drama of Eisenstein’s film of course, but has an intoxicating rhythm to it and beauty in its imagery that make it hard to look away from. This is strengthened by the newly created score by Jason Singh which is ethereally ambient for the most part, easing you into the ebb and flow of Grierson’s film then building to a punchier sound as the boat brings in its haul and heads to the market.

Drifters is maybe a little dated and slight now, compared to the wealth of strong documentaries we get these days, but its importance can still be felt and it makes for a strangely compelling watch.

Battleship Potemkin/Drifters is out now in a dual format Blu-Ray & DVD set, released by the BFI. I watched the Blu-Ray disc and the remastered prints for both films are stunning. Damage is minimal and contrast natural with the added detail you get from high definition. I love watching classic black and white films like these on Blu-Ray as they were made for the big screen and DVD’s aren’t quite good enough to get that natural filmic look to the presentation when blown up on a large TV or projector.

There’s nothing in the way of documentaries, commentaries or interviews added to the package, but you do get a handful of extra short films. Granton Trawler (John Grierson, 1937, 11 mins) is one of the GPO film unit’s first experiments in sound and it’s a fascinatingly abstract piece, making use of minimalistic sound montage. Trade Tatoo (Len Lye, 1937, 6 mins) is a stunning experimental animated short which was put together by taking splices of film from the GPO (including Drifters) and playing with colour treatments and drawing on the celluloid, to create a psychedelic short that was 30 years ahead of its time. Last up is North Sea (Harry Watt, 1938, 32 mins), a later GPO film which offers a more dramatic take on the seafaring theme, following sailors battling with the elements.

On top of the shorts you get an excellent booklet included in the package, which charts the history of bringing Potemkin and Eisenstein to the UK as well as discussing Grierson and his work.