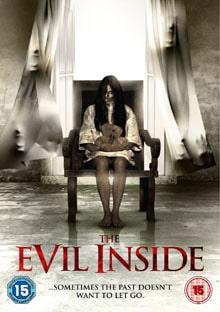 The Evil Inside follows Sarah (Hannah Ward), a teenage girl suffering mental health problems, her deathly premonitions and an impromptu party that turns into a bloodbath. Originally titled Dead Inside in the US, the movie has undergone a name change for the international market.

The opening minutes of the film imply that Sarah has suffered some mental trauma, going on to show her having a premonition of death that soon happens. Having recently returned to her home town with her parents, Sarah is reunited with her childhood friend Lucy (Sage Howard). When Sarah’s parents have to go away, Lucy is asked to keep her old friend company at a sleepover. She invites along Wesley (James Adam Lim) for company, who also invites some friends to the “party”.

Before long Sarah has more premonitions, the deaths of each of her new “friends”. As the nightmare unfolds, tensions build, friendships are abandoned and murder ensues. Knowing that each of the revellers will probably die, the rest of the film really takes us through how each of them dies, and their battle to survive each other. With all the exits locked there is no chance of escape from the house. Though why none of the group tries to open or break one of the enormous windows is the biggest mystery. Meanwhile, Sarah is tormented by an unseen whispering entity that locks her away in the attic.

Though the premise may be likened to Final Destination, the pace seems uncomfortable, being closer to a grown up horror movie such as The Others, rather than a teen slasher. That said, typical teen characters are there, such as the bitchy BFFs and feuding suitors.

As a low budget indie, the film suffers technically from numerous sound issues. Early camera work such as abstract angles and blurred long shots seem to suggest a theme that is never repeated through into the rest of the film. Director Pearry Teo is no newcomer to his art, with horror Necromentia and sci-fi comic book adaptation The Gene Generation (starring Bai Ling) under his belt.

What is a pleasant surprise is the level of acting. Sure, no Oscar nods here, but the cast each hold their own admirably. This is no doubt helped by first time writer Jennifer Zhang (also playing bitchy BFF Serena), who keeps it simple and doesn’t overdo the trash talk usually associated with this genre. Unfortunately none of the characters were likeable enough to root for, nor evil enough to want to see dead.

Compared to what the audience is used to these days, the deaths are not exactly gruesome, or elaborate. Where The Evil Inside may not be shocking or even all that frightening, it is creepy and eerie enough that it may leave you feeling just a little uneasy.