Beasts of the Southern Wild – Music From the Motion Picture 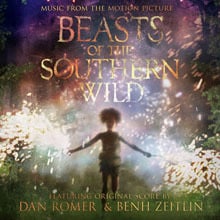 Garnering much praise at Sundance at the start of the year, then wowing myself and many others at Cannes in Spring, Beasts of the Southern Wild is one of the indie hits of the year, raking in $11 million in the US (pretty good for a film with a budget of under $2 million) and picking up pretty unanimously positive reviews across the board.

The film tells the story of Hushpuppy (Quvenzhané Wallis), a six year old girl that lives with her troubled but loving father Wink (Dwight Henry) in the Bathtub, a Southern Delta community under threat from the rising water levels. As flooding threatens their homeland and Wink’s health deteriorates, Hushpuppy draws strength from her fantasies – but even these threaten to turn on her as the approaching flood waters bring with them a herd of evil giant warthog-like creatures, the aurochs.

Much of the film’s pleasure comes from its joyful energy and exuberance despite such potentially bleak subject matter. This is buoyed by Wallis’ extraordinary performance and the vibrant direction, but drawing it all together is the film’s excellent score which was co-composed by the film’s director Benh Zeitlin alongside his regular collaborator (on previous short films) Dan Romer. It’s quite simply gorgeous. The music perfectly complements the touching, yet joyous nature of the film as well as capturing a sense of place with a large bluegrass presence to much of it.

The opening track, ‘Particles of the Universe’ is a brief, subtle, music box affair, but leads into the joyous build of ‘The Bathtub’. This mixes uplifting orchestration with lively bluegrass elements featuring The Lost Bayou Ramblers, to take viewers and listeners on a spectacular tour through the film’s community.

The following track changes things again, ‘Momma’s Song’ has a distant vintage sound to reflect the lost mother that only remains in nostalgic tales told by Hushpuppy’s father. Indeed, the album isn’t all bouncy vibrancy, there is a dark edge to much of it. There is fear and uncertainty present in the quieter moments as well as the joy, throughout the album. ‘Strong Animals’ for instance is quite dark and frightening at the start but builds to something stronger, still with a dark edge.

The soundtrack maintains a hopeful feel though and everything builds to ‘Once There Was a Hushpuppy, the standout of the album, bringing proceedings to a gloriously big, bold and spirited close.

With all of these great tracks bleeding into one another the soundtrack also makes for a great ‘album experience’, so begs to be listened to as a whole. With varied and exciting cues, it’s an easy recommendation and stands as one of the new soundtracks of the year.

Beasts of the Southern Wild – Music From the Motion Picture is out now on digital download.

To buy the soundtrack digitally in the US head over to iTunes.

Or if you’re in the UK try this link.

Listen to the soundtrack on Spotify: 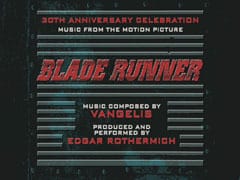 Vangelis’ groundbreaking and iconic score to Ridley Scott’s Blade Runner is one of the most well-loved soundtracks of the late twentieth century. Using synthesisers to produce a truly cinematic and lush sound, it ushered in a new era for electronic scores, yet has rarely been bettered.

When I was offered this new 30th Anniversary re-recording of the score I was hesitant though. Going back to original soundtracks and performing them again is too often done as a cheap cash-in – a lazy cover version of a classic. Approaching something as well-known as Vangelis’ work on Blade Runner seems tantamount to sacrilege. Interestingly though, and I didn’t know this before reading up on the soundtrack ready for writing this review, the true original score used in the film Blade Runner was never actually released commercially. Due to a dispute between Vangelis and Scott over the director’s use of his music and the fact that the film itself underwent so many changes over the years, none of the numerous official releases of the soundtracks contain the actual music as it appears in the 1982 film.

Despite this fact, as with most ‘cover-versions’, I’m sure many will write this re-recording off without even giving it a listen, but I have to say, the new arrangement and production sounds great to me. Composer and producer Edgar Rothermich, long time collaborator with Christopher Franke (Tangerine Dream), has done a wonderful job. Judging by the soundtrack’s PR material, it was a difficult one too. Vangelis composed the entire score directly through recording on keyboards, so no written transcriptions of the score exist. This meant that Rothermich had to effectively reverse-engineer the score, listening to the original music and a 1982 reproduction and transcribing it by ear.

Well, to my ear he’s done so fantastically. A big issue with adapting a synthesised score that was originally produced in the early 80’s of course is that technology has changed, but Rothermich has clearly gone to great lengths to reproduce Vangelis’ signature sound. This new version is polished, but still retains warm, analogue-sounding synths which are as effective as ever. The beautiful, moody, synthetic soundscapes are all still there in all their glory.

Away from analysing the new recording, the music itself, like the film, manages to remain effective and relevant after 30 years which is quite a feat for an 80’s synth score. Granted, that 80’s sound has re-emerged in recent years, but this isn’t retro-pop, this is the finest example of using electronic sounds to create something truly sumptuous.

If I had on complaint it’s that the swing song ‘One More Kiss’ jars. It fits the noir aesthetic of the film, but it’s markedly different from the rest of the music and makes it feel like the album has finished and moved on to the next in your playlist.

This is a minor blip in a great album though. ‘Cover-version’ or not, by sticking as closely as possible to the original sound of a score that has never been commercially released, Rothermich has put together something that fans of Vangelis’ soundtrack really ought to get their wallets out for. Dare I say it, I prefer it to the previous ‘original’ album releases.

Music from the Motion Picture Blade Runner (30th Anniversary Celebration) is out now on digital download.

To find out more or to buy the soundtrack head over to Buysoundtrax.com.

Samples of the Soundtrack 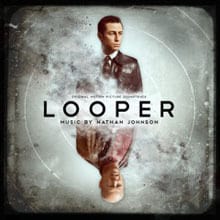 Like Beasts of the Southern Wild, Looper is another 2012 release that is sure to be high up my list of favourite films of the year come January. Rian Johnson’s time travelling action thriller stars Joseph Gordon-Levitt as a hired gun that kills targets sent directly to him from the future. It’s a straight forward job, with victims arriving promptly in a specified location, ‘gift-wrapped’ with rope and a hood, until a future version of himself (Bruce Willis) appears unhooded as his next hit.

To give any more away would spoil the film, as to me it was most successful in constantly throwing up surprises along the way. Although it plays with techniques and ideas that have been used before, the film boils them down to their essence and re-imagines them in an exciting and deeply involving fashion.

Nathan Johnson’s soundtrack is equally as effective in a similar way. At its core it is a straight forward action score, but Johnson (the director’s cousin and longtime collaborator) used field recordings and abstract percussive sounds to construct the music. He recorded things like metal chains and car doors in garages as the foundation for the sound, then by using these varied samples and mixing them with orchestral elements he has created an intense, industrial, but cinematic sound.

Most of the tracks follow this rhythmic, metallic construction, with slightly disturbing noises lurking in the background. It’s dark and moody but often exciting and exhilarating.

Tracks like ‘Revelations’ bring things back down to Earth with poignant stripped down piano, but often (like in that example) this subtly builds into something more sinister. This piano motif, and other orchestral elements, play a larger part in the dramatic, yet occasionally quite moving final tracks though, making for a satisfying conclusion to the album.

Overall the soundtrack to Looper is a bit too fractured and abstract to be something you’d put on your stereo or headphones regularly, but as action scores go it’s refreshingly original and highly effective.

Looper Original Motion Picture Soundtrack is out now on digital download and CD.

To buy the soundtrack digitally in the UK head over to iTunes.