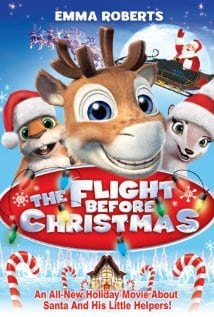 Largely a Finnish production in terms of talent, but with Danish, German and Irish backing, I’d actually seen the Finnish language version of this a year ago under the title Niko – Lentäjän Poika (Niko, the Pilot’s Son in English), but now it hits the UK on DVD with an English language soundtrack added. With Christmas just around the corner I thought it would be a perfect time to post a review of this surprisingly good European CGI-animated children’s Christmas film.

Niko is a young reindeer who longs to join the ranks of Santa’s Flying Forces, the crew of aerial masters who pull Santa’s sleigh on Christmas Eve/Day. The fledgling struggles to get off the ground himself, leaving him stranded with his grounded pack in the forest, miles from Santa’s Fell. However Niko is certain that he has the ability somewhere within himself to fly as he is told that his father, who left before his birth, is a member of the famous troupe. After getting into trouble with his reindeer family after accidentally bringing a pack of wolves back to their patch, Niko heads off to find Santa’s Fell and his father to fulfil his life long dream. In tow is father-figure Julius (a flying squirrel) who tries his best to keep him out of trouble and hot on their trail is the pack of wolves, whose new target are the Flying Forces and Santa himself!

If it’s not obvious from the film’s cover art and financial shortfalls, The Flight Before Christmas is not quite in the same league as the Disney/Pixar or Dreamworks animated films. It lacks the rich narratives of the Toy Story films and the CGI is a long way behind the impressive tech John Lasseter and co get to play with. However, for a film aimed more purely at a younger audience that keeps things nice and simple, it’s a wonderfully entertaining and loveable Christmas film that is much more watchable than most of the yuletide ‘logs’ that populate daytime TV around the season.

It’s a film that knows what it is and what it needs to do so doesn’t mess around trying to cater for adults or make poor efforts to get ‘down with the kids’. There’s a refreshing lack of pop-culture references, no obnoxious comedy sidekicks, minimal cheese and next to no naff musical numbers other than a couple of very brief songs sung by Wilma (Emma Roberts), who performs regular ‘gigs’ for the Flying Forces.

As well as leaving out potentially naff elements, it gets it’s foundations spot on too. It’s very well paced, with little down time in it’s brief 78 minutes. This is helped by some set-pieces that aren’t original by any means, but are well handled and exciting enough to work. Its central narrative has enough heart, depth and a hint of darkness to keep you interested in the story and characters too. The element about Niko’s real father in particular is quite a bold choice, without feeling too adult or out of place. In this day and age it’s probably quite relevant too with so many children growing up in single parent households. 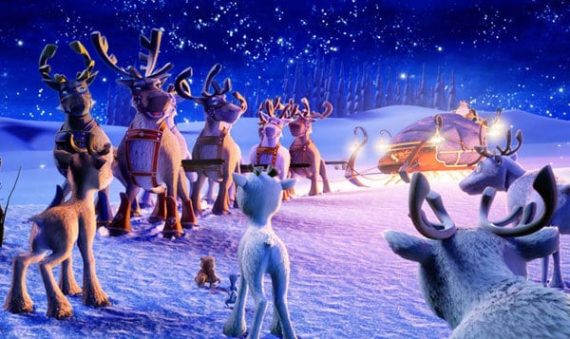 The English dub of the film isn’t too bad. I have a real problem with the English dubs of Miyazaki’s work, it just seems wrong, but I think that’s mainly because the characters and style are very Japanese and to hear American accents coming from their mouths doesn’t fit. Plus the rhythm of Japanese doesn’t match the rhythm of the English language. Luckily with The Flight Before Christmas, the characters don’t have a noticeable geographic style and the dub seems to fit nicely. My only complaint would be that the performers aren’t particularly brilliant. With quite a minimal budget I wouldn’t expect big names though and in general the film’s leads do a reasonable job, it’s just that a few of the minor characters sound a bit poor.

It’s a predictable, straight forward film, but gets so much right that it doesn’t really matter. It’s a fun, pleasant family film with some surprisingly moving moments, mixed with plenty of child-friendly action and light humour to keep kids and their parents engaged for under an hour and a half. Released at a discounted price in the UK, it’s well worth a purchase for any parents looking to keep their kids occupied whilst they get ready for the holidays.

The Flight Before Christmas is out now in the UK on DVD by Metrodome Releasing. There are no features at all and no option to listen to any of the other foreign language versions, but the picture and sound quality is solid. Retailing at a bargain price you can’t go wrong though.