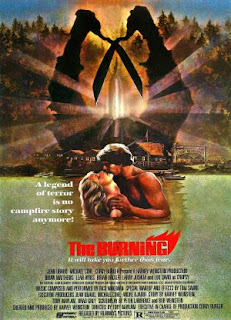 A bit of a cult-classic slasher film from the early days of the genre, The Burning was placed on the Video Nasties list in the 80’s. Watching it now, despite a couple of gory scenes, it’s hard to see why, but I still had fun with the film.

Its plot is clearly ripped off Friday the 13th (released the year before); a nasty, alcoholic groundsman who was burned in an horrific accident exacts his revenge by stalking a bunch of teenagers at a summer camp with a pair of garden shears. From then on you know the drill; teenagers get naked, do stupid stuff and crazed killer hacks them to pieces.

As I said at the start though, despite its over-familiarity I still found myself rather enjoying the film. I think one thing that helped was the fairly realistic and amusing banter between the characters. The film’s ‘hero’ Todd (Brian Matthews) is bland and uninteresting but the supporting cast including future stars Jason Alexander and Holly Hunter are mostly quite likeable and I actually found myself feeling disappointed when some of them got killed.

The gore is well handled too by the master Tom Savini. It’s not his finest work, but Savini on a bad day is still impressive and inventive. A massacre set on a raft (deleted from some censored versions of the film) is particularly brutal and is the centrepiece of the film, still shocking to watch today.

It’s obviously not a perfect film though, as mentioned before some of the lead performances are pretty weak and plain annoying at times. There’s also a ridiculous amount of nudity and sexual content in it. I’ve got nothing against it generally, and I’d never turn my nose up to a bit of T ‘n’ A now and again, but it does start to get pretty silly.

So if you’re in the mood for an old-style slasher that doesn’t offer much new, but is fun and mindless you’d do worse than dig this out from the archives.