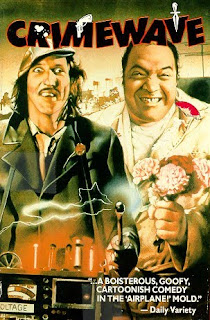 Yes you read that correctly – this film was directed by Sam Raimi (Evil Dead, Spiderman etc.) and co-written alongside the Coen Brothers (No Country For Old Men, Fargo etc.). And yes it was released not long after Evil Dead or Blood Simple too, yet I can imagine a large number of you are thinking, ‘why have I never heard of this film, and why haven’t I seen it?!’

There’s a simple answer, and that’s because it’s really not very good. This seems unthinkable coming after the two classic debut features that the filmmakers released only a year or two previously, but it happened. Reading into the background of the film last night after watching it told a story more interesting than the one I had just sat through. Basically, after the success of Evil Dead, Raimi was approached by Columbia Pictures and given a deal to make a studio picture. He decided to make Crimewave (aka The XYZ Murders), a project he’d been working on with co-producer Bruce Campbell and the Coen Brothers who were at the time trying to distribute Blood Simple. The studio however, as is often the case, took over the project which Raimi and Campbell were struggling to keep a handle on – they were used to making films on their own time and money so couldn’t to get to grips with the schedules and restraints of the Hollywood system. They also insisted on recasting the film, kicking original star Campbell into a minor role. In the end the film was torn to bits in post-production by the studio and Raimi and Campbell have since disowned the film.

A much better-told account of this story can be found here:

Anyway, back to the film itself. As I mentioned earlier, the plot is fairly weak; a man that runs a security firm alongside his partner, learns that this seedy fellow is planning on selling the company under his feet. He decides the only way to save his business is Buy Revia Online Pharmacy No Prescription Needed to get the man killed. He hires a couple of deranged exterminators to do the job and things get totally out of control as the bodies pile up and our protagonists, a young, ill-fitting couple, get drawn in somehow. This is all framed by the hero being led to death row for all the murders that occured. 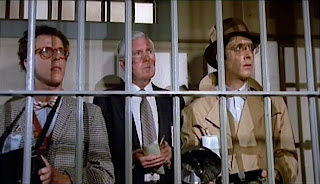 Seeing the plot written out like that, it almost sounds like the makings of a quirky Coen Brothers classic piece of neo-noir, but believe me it doesn’t end up that way. The film is a real mess and clearly the studio had their scissors out at some point. Scenes just seem to happen rather than flow together and little of it makes sense at all. 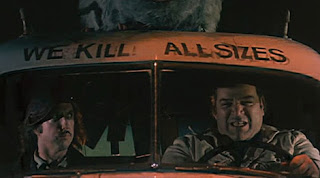 I should point out though that despite all of the film’s problems, it is not without merit. There are several set-pieces that are incredibly imaginitive and stand out amongst the confusion. A chase involving dozens of multicoloured fake walls and a scene where one of the exterminators clashes with the wife of the security firm boss in particular stand out as clear examples of Raimi’s talents. Bruce Campbell chews up the scenery in his small role too as Renaldo “the heal”, and makes you wonder what the film would have been like with him in the lead role. Reed Birney tries his best, but doesn’t have the charisma or comic timing to hold the reins in such a madcap film.

Speaking of madcap, this really is a very silly film. Made in obvious homage to The Three Stooges and The Looney Tunes, Crimewave attempts at every turn to capture the zany, fast-paced humour of a live-action cartoon, but rarely achieves it’s goal. Most of the jokes fall flat on their face, and even though the film is wholly chaotic, it still manages to feel a bit slow – quite an achievement for an 80 minute film! On occasions you’ll get into the mood of it all (namely in the sections mentioned previously), but the messiness of the structure and the poor lead performances just bring it crashing down again.

If you’re a fan of Sam Raimi or the Coen’s then I recommend you track down Crimewave and give it a try, but do approach it with caution and treat it purely as a curiosity, because it’s a long way from Evil Dead and The Man Who Wasnt There.