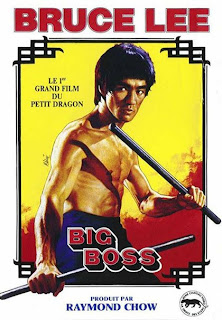 The Big Boss (otherwise known as Fists of Fury in the US – which is the UK title for his follow up confusingly!) was Bruce Lee’s breakthrough film, turning him from TV sidekick and ex-Hong Kong child star to global megastar. It also helped kickstart the huge Kung-Fu craze in America (alongside The Chinese Boxer and King Boxer which were released a little earlier in the west). For these reasons The Big Boss has achieved a classic status among martial art movie fans. Being one myself, I can fully appreciate the impact it had and moments of the film fully justify this, but it’s certainly not without its flaws and is not Lee’s best film by a long shot.

The plot is hardly worth mentioning – it involves a family working in an ice factory, that unbeknownst to them is actually operating as a drug smuggling racket. Whenever anyone gets close to sniffing this out they get brutally murdered. Lee plays a friend who initially stands on the sidelines as people are bullied, bribed and murdered, due to a promise he made to his mother not to get into trouble. This promise of course is shattered into a thousand pieces as Lee vows revenge on the drug dealers and proceeds to kick seven shades of sh*t out of everyone.

Unfortunately, from an action perspective this ‘promise’ means that we barely see Lee lift a finger until half way through the film, and even then it’s not until the last half an hour or so that he really lets rip. When it comes, you really do get to see why Bruce Lee became such a household name though. Although the choreography isn’t as impressive as in some of his later efforts, this contains some of his most brutal and animalistic fight sequences, especially in the intense and bloody showdown with Ying-Chieh Han, who was actually the action choreographer on the film.

Performance wise, Lee was never going to win any Oscars for The Big Boss, but his star power and charisma is clear on screen. The moment when he first snaps and breaks his ‘no violence policy’ in particular is filled with an awesome ferocity and intensity. Away from the action scenes he’s not given much to work with, but he still stands clearly above the rest of the cast.

Lee’s charisma and a couple of strong action scenes aren’t enough to make this a great film though. Fist of Fury is a much more successful effort and although martial art purists will scoff at the idea, I think Enter the Dragon, although in some aspects watered down by Hollywood, improves on films like The Big Boss with tighter pacing and more polished production.

The Big Boss has some strong moments that showed the world Bruce Lee’s potential as an action superstar and still impresses in the fight scenes, but ultimately it’s a cliched and cheesy film which takes too long to really get going.

* As a side note – I watched the Hong Kong Legends Platinum Edition DVD of the film and it looked amazing, especially considering it’s age. It’s a shame the company no longer exists, as it was a driving force in my martial arts movie addiction.