No, not Tarantino’s latest self-indulgent trash homage, but the original 1977 not-quite-so-classic complete with correct spelling. It felt only right that I should review this now whilst it’s namesake (it’s certainly not a remake) is still out on general release.

Inglorious Bastards, otherwise known as Deadly Mission, is low budget Italian trash at it’s most refined. Yes, it’s as shoddily dubbed as most films of it’s type and it’s loaded with cliched characters and situations, but I have to admit I really enjoyed it.

The plot is a morally ambiguous twist on the old-fashioned boy’s own adventure war stories, and is hardly Shakespeare, but it works. Basically a group of five disgraced soldiers heading for a court marshal (including low-budget legends Fred Williamson and Bo Svenson) get a lucky break when their truck is ambushed, and the group escape towards Switzerland. On the way however they get caught up in various sticky situations and end up accidentally roping themselves into helping the French Resistance in a suicide mission involving a heavily armed fortress and a train carrying a deadly missile. 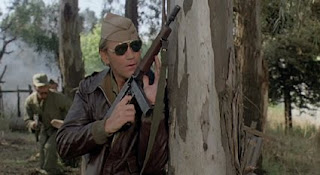 It’s clearly a rip-off of The Dirty Dozen, but what kept me interested was the pacing, the film rarely lets up and I couldn’t help getting caught up in it all. Discarding the moralistic speeches and labored character development prevalent in a lot of old war movies, Bastards just sticks to what it does best, shooting Nazi’s and blowing shit up. The action is hardly masterfully choreographed (think A-Team not Hard Boiled), but that’s all part of it’s charm. The cast all seem to be enjoying themselves and no one takes things overly seriously. One ‘cowardly’ character grates a bit at the start but grew on me as the film went on. Fred Williamson makes up for this by delivering his usual super-cool charasmatic performance that won’t win him any oscars, but makes the film a hell of a lot more fun. 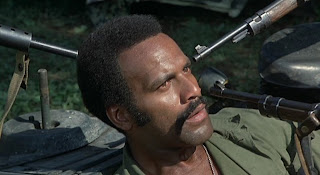 Some incredibly bad model shots threaten to push naffness a little too far at the end, and a totally random sequence involving gun-toting skinny-dippers doesn’t settle well, but overall there’s a lot of fun to be had here. So if you’re willing to switch off your quality control and are in the mood to see Fred Williamson mowing down lines of Nazis with a cigar in his mouth, then this is well worth a watch.