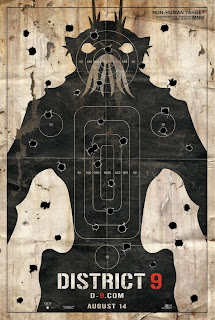 Coming out at the tail end of summer, District 9 makes a refreshing change to the spate of poor blockbusters this year (bar maybe Star Trek which I quite enjoyed). An original concept and setting for a big budget movie alongside other factors push this way ahead of rubbish like Transformers 2.

District 9 introduces us (using a ‘mockumentary’ style) to an alternate reality where a small populace of bedraggled aliens, nicknamed ‘prawns’, appeared on Earth (specifically Johannesburg in South Africa) in the 1990’s. Over the 20 years they have lived here the group have become marginalised and forced to live in a cordoned-off area that has degenerated into a filthy crime-ridden slum. The film begins with the prawns being forcibly evicted from this refuge to be moved to a newly constructed camp within 24 hours. 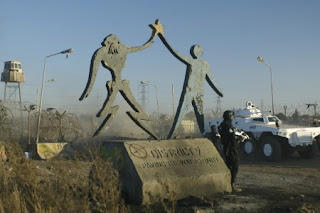 From reading the brief synopsis above and after having seen any of the film’s publicity it’s clear what the filmmakers are trying to get at. At the start of the film the parallel’s between the aliens and real-life immigrants are really hammered home and threaten to get heavy handed, but the filmmakers keep it under control by introducing a more central narrative strand and sticking to it.

This shift however leads me into one of the few problems I had with the film. The first 20 minutes or so stick rigidly to the initial concept of a documentary format, where interviews fill in the gaps (sometimes unnecessarily so it must be said) between handheld footage following the events as they unfold for the human protagonists. Randomly within a very naturalistic sequence however we are thrown into a different format, observing a scene that would never form part of the ‘documentary’, and from then on the film loses the concept completely. This isn’t a big problem as such, because after the initial shock the film does settle nicely into it’s new skin, but it still seems an odd decision. Perhaps if the shift had occurred earlier it wouldn’t have been noticeable, but it comes close to a quarter of the way through the film once you’re fully involved. 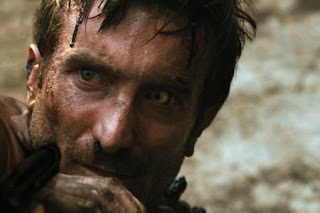 Also, once the film becomes more of a film and loses it’s documentary trappings, it picks up a few cliches along the way and starts to feel a little more conventional after an intriguingly fresh opening. I mean ‘a little’ though, as the South African setting, the cast of unknown actors and the unpredictable ending do still create a more interesting blockbuster experience. Also, although the film changes style, it still works very well. The action scenes towards the end of the film are outstanding and the special effects are mostly seamless throughout even with such a raw feel to the lighting and camerawork. The fact that one of the main characters consists completely of CGI is barely noticeable. The lead actor Sharlto Copley Buy Viagra Super Active+ Online Pharmacy No Prescription Needed actually improves dramatically as the film moves on too, after getting off to a shaky, caricatured start.

District 9, despite it’s inconsistencies, is a hugely entertaining film with a fair amount of brains and lets the world know that first-time director Neill Blomkamp is a a name to watch out for.